Although Yeison and I have been living in Coco for a little over a year, we hadn’t gotten to know many of the local Coqueños (name for locals of Coco).

So when we were introduced to one of the oldest families living in Coco when we interviewed a local sportfisherman, we became friends fairly fast and Caliche invited us to his birthday party.

For me, a birthday party has become kind of a dying art. In college, we were all too lazy or busy to plan birthday parties and just sent out Facebook invites to a casual dinner and then hungout at a bar or club afterwards. We had grown out of the stage where we had birthday parties with our families and friends like we did when we were younger.

So when we pulled up to Caliche’s house, I was completely taken aback. You could hear the music blocks away, there were balloons hung everywhere and so many people hanging out underneath the roof from the rain.

There must have been at least 50 people sitting, dancing, walking around in and out of the house, kids everywhere and was that music loud! The band would play for awhile and then take a break but the salsa music kept going. There was a grill on the side where they had huge portions of meat sizzling and a table for presents. 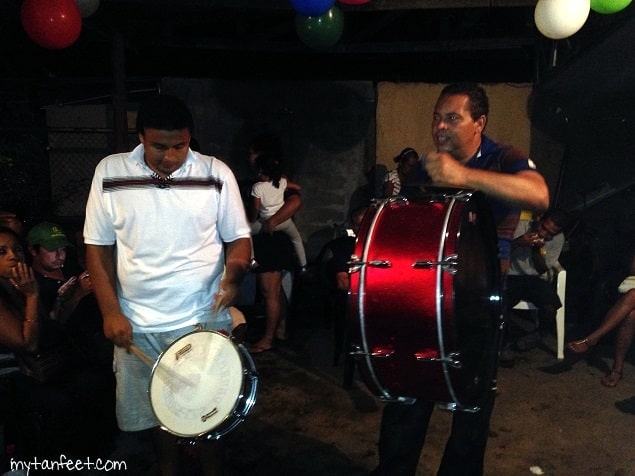 Of all the people that was at the party, only 4 people were not related to Caliche: Yeison, myself, our friend Jeffrey and one other guy. Everyone was family somehow! Either by a cousin, married in or a cousin or a cousin. I honestly felt like I was a part of something special.

Yeison told me that it was so rare to see parties like this anymore and this is what parties were like in San Jose probably 20 years ago. Even he remembers going to parties like this as a kid! Everyone gets together in one house, plays live music, has a ton of food, everyone sitting in chairs, dancing, kids running around and people hanging out in the street.

This was a true, authentic Costa Rican birthday party that you don’t see much in the country anymore since everyone usually goes to a restaurant or does something more formal to celebrate their birthday.

This was a real Coqueño family, their roots were embedded in Playas del Coco for years and years as all the past generations were born and grew up there. Caliche’s family has such a passion for fishing that goes back decades. His grandfather was the first person in Playas del Coco to start sportfishing charters and being such a fishing lover, how can you not have a cake with a marlin on it?


His mom was at the grill, serving food, greeting everyone and you could tell everyone there was just having a great time. Costa Rica has been named the happiest country in the world many times or has been in the top 5 happiest countries and at this party, you can clearly see why.

The atmosphere was so fun and full of joy and love, everyone was talking to each other (Ticos love to meet people) and they treat you like family as soon as they meet you.

It’s the simple things in life that brings you joy and Ticos really appreciate that fact whether it’s spending time with family, just sitting and talking, having a drink with an old friend or dancing the night away with everyone around you. They don’t need a lot to enjoy themselves. 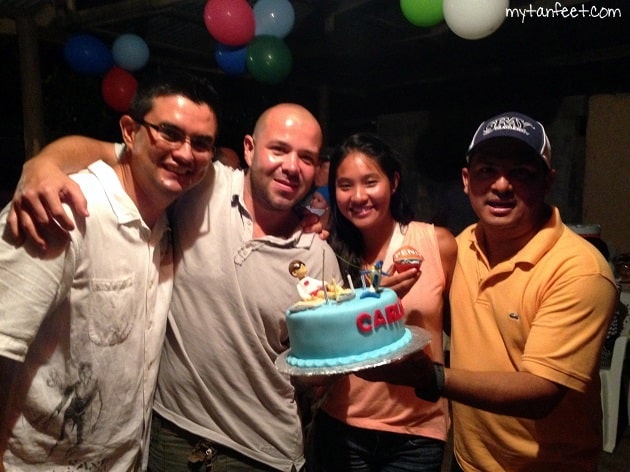 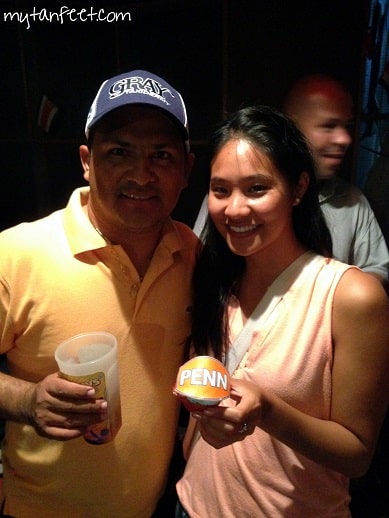 It didn’t matter that Caliche was in his 30’s, that it was pouring down rain or that it wasn’t a formal sit down dinner, Ticos love to celebrate and a birthday is one of the best reasons to have a party!

After it stopped raining, people started to move into the street. The band started playing again and everyone was dancing in the middle of the road, with a drink in their hand and smiles on their faces. 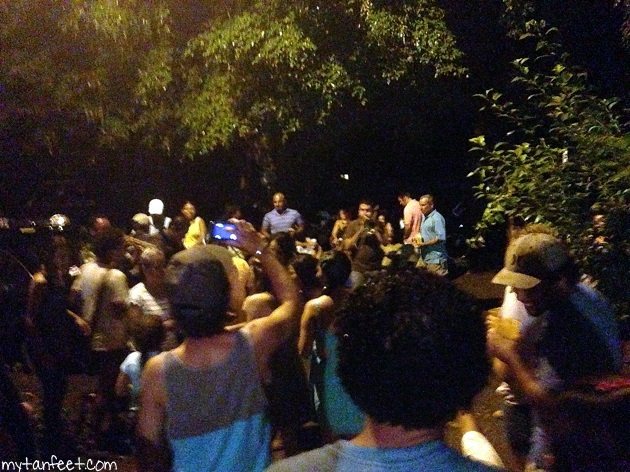 I was so grateful that I was able to experience what authentic Costa Rican birthday parties are like and I really hope that it isn’t my last! Learning about a new culture is an ongoing process and I had an amazing time. I’m one step closer to being a Tica 😛

How to show love in Costa Rica