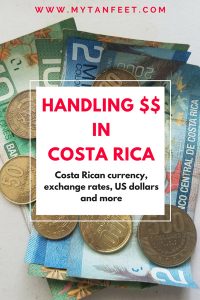 Handling money is one of the most crucial and important things to know before you travel abroad. Nowadays credit cards are the norm and cash is the atypical but in Costa Rica, it is still useful to have some cash on hand. Here is all you need to know about handling money in Costa Rica when it comes to local Costa Rican currency, exchanging money and using USD in Costa Rica.

The Costa Rica currency is the colon (colones plural), named after Christopher Columbus. The Costa Rican currency symbol is ₡, a c with two lines across.

As of November 2019, the current exchange rate is around 570 Costa Rican colon to 1 USD. You will notice that many locals use a 500 to 1 exchange rate as it is the easiest to calculate but the rate has gone up quite a bit! 500 to 1 is no longer close to the correct exchange rate.

Tip: Make sure to always calculate the exchange rate when using USD because some locals may try to pull a fast one with the exchange rate and still use 500 to 1. If they give your change back using the 500 to 1 rate, you will be losing money (more on that in a bit).

Costa Rican currency is really pretty with animals and bright colors. It’s one of the most colorful bills in the world! And I love that each one has a different animal on it.

Interesting fact: The 1000 colones bill (red) has the national animal which is the white-tailed deer.

How to Quickly Calculate the Exchange Rate from Colones to USD

Is USD accepted in Costa Rica?

Yes, Costa Rica does accept USD! And readily. This is because Costa Rica is a touristic country with United States citizens as their main tourists. Additionally, many American companies have headquarters in Costa Rica.

You will notice that many tours and hotels are quoted in USD and even some restaurant menus have prices in USD. This is very apparent in touristic destinations. And thanks to the increasing exchange rate, locals get more Costa Rican colones if they are paid in USD. For example, if you tip 5,000 colones it’s only about $8.80 compared to a $10 bill.

Additionally, nearly all tour companies and many Costa Ricans have a colones and a USD bank account. Mortgages, car and down payments are quoted and paid in dollars so it is a big deal when the exchange rate fluctuates a significant amount.

Because of this, you do not necessarily need to exchange money before traveling to Costa Rica if you already have USD. However, there are some exceptions which I will talk about below.

Costa Rica Money Common Question: How much cash should I bring to Costa Rica?

This depends on what you plan to do and where you are going in Costa Rica. Credit cards are accepted in Costa Rica nearly everywhere though so you don’t have to bring a ton of cash. However, some businesses touristic destinations may not accept credit cards. We found this to be very common in Santa Teresa, Samara and Tamarindo so keep that in mind if you plan to visit those destinations.

Most tour companies can let you pay by credit card or Paypal if you pre-book tours online. If you are booking the day of or last minute in person, some may only accept cash.

Our personal recommendation for using USD in Costa Rica: Bring small bills. It is very hard to break 50s and 100s in Costa Rica unless you go to the bank or a casino. Also make sure all the bills are in good condition – no rips, tears, misprints, stains, super wrinkled bills. Costa Rica is very strict on this and they will not accept any bill with a flaw. I once received a $20 bill from the ATM that had a tiny folding misprint and no one would take it except the bank!

For a one week trip, I would recommend to bring a few hundreds dollars in cash per person. When you first get here, exchange about $100 USD to Costa Rican colones. Then if you need to exchange more, you can do it later on because you don’t necessarily need to go to a bank to exchange money in Costa Rica.

Costa Rica Money Common Question: When Should I Use Dollars or Colones?

Even though USD are accepted in the touristic destinations in Costa Rica, there are some places where it is more favorable to use one or the other. Remember, if you pay in USD, you will get your change in Costa Rican colones.

Pay in USD when things are quoted in USD. These are things like tours, private/shared shuttles, hotels, etc. Usually the more expensive products in tourism. This is the best currency to use in Costa Rica for these kinds of things.

If in San Jose or any of the Central Valley cities like Atenas, Grecia, San Ramon, Zarcero, pay in Costa Rican colones.

Use Costa Rican colones for smaller priced items quoted in colones. These are supermarkets, souvenir stores, farmers markets, street vendors, taxis, buses, gas stations and toll booths. That way you don’t need to worry about losing out on the exchange rate or having to calculate to the exact colon if you use USD.

The buses that you pay when you get on in San Jose do not accept any currency except Costa Rican colones. Buses with long routes (like San Jose to Liberia or Puerto Viejo) must be paid in advance via credit card, USD or colones at the bus station. You can pay the toll booths in USD but colones is much more preferred because you won’t have time to see if they calculated the exchange rate correctly. If you pay the tolls in USD, make sure to pay in small bills.

You can tip in either colones or dollars but dollars are preferable in the tourism industry.

Where Can I Exchange Money in Costa Rica?

For the best exchanges rates in Costa Rica, go to the bank. You can exchange currency in Costa Rica at any of the banks like Banco Nacional, BCR, etc. Make sure to bring your original passport (not photocopy) and write down how to ask in Spanish, “Yo quiero cambiar dinero” Do note not all bank tellers speak English but body language works well and they will know you need to exchange money once you present the cash and your passport. You also need to know how much money you are exchanging.

You can also exchange currency at the airport in Costa Rica. Both the Liberia International and San Jose International Airport currency exchange is right when you exit customs and at baggage claim. You don’t get the best exchange rate so if you can wait until the bank, I would.

Hotels can also exchange Costa Rica currency for you. Usually only the big chain hotels can exchange money only like Marriotts or Hiltons, not the small family run inns, budget hotels or hostels.

You can exchange Costa Rican currency at the supermarket, gas stations or restaurants. If you pay in USD, they will give you your change back in colones. Just make sure to check the exchange rate as they should post a sign somewhere the exchange rate they use.

Can I Use Canadian Dollars or Euros in Costa Rica?

Canadian dollars, Euros, or any other sort of currency besides USD are not accepted in Costa Rica. Not all banks accept or exchange Canadian dollars or Euros either, very few do. Scotiabank usually is able to exchange currencies other than USD.

ATM Use in Costa Rica

You can find ATMs in nearly every touristic town in Costa Rica (exceptions are Drake Bay). They are in English and Spanish and you can withdraw both Costa Rican currency and USD. This works for Canadian bank cards or other bank cards.

All banks have an ATM and they are available 24/7. We do recommend to withdraw money during the day and be cautious of people hovering about.

What Credit Cards are Accepted in Costa Rica?

Nearly all credit cards are accepted in Costa Rica. The exception is American Express which is accepted only in certain places so make sure to have a Visa handy. You will see pictures on the windows of stores of which credit cards they accept (but some are misleading so don’t always believe it 100%). Visa is the most widely accepted.

Credit cards are widely accepted in Costa Rica but in some places, they are not. These are destinations like Samara, Santa Teresa, Montezuma, and some places in the South Pacific (Dominical/Uvita/Ojochal/Osa Peninsula) and some businesses in Tamarindo. Make sure you have plenty of Costa Rican colones or USD with you if you’re visiting those places. In rural, remote areas, it is best to use colones. This is especially present in Santa Teresa, they are known for being a cash only zone. Additionally, they only have ONE ATM in town so bring cash with you because there is always a long line.

If you visit during low season like September or October, some businesses will give extra discounts if you pay in cash. For example, we visited Manuel Antonio in Sept and Emilio’s Cafe was having a 50% discount for dinner, cash only (USD).

If you’re going souvenir shopping, usually they will give you a discount if you pay in cash so they don’t have to charge the credit card fee.

Important Things to Look Out For When Paying with Credit Card

Know which currency you are paying in when using credit/debit card!

Sometimes the vendor will ask you which currency you want to pay in: Costa Rican colones or USD. Make sure to tell them which currency and check the machine before entering your PIN number or pressing the yes button. However, not all vendors will ask you.

The vendor may instead enter the amount to charge in colones instead of USD and that’s a HUGE difference. So instead of being charged $10 USD, they charge you 10,000 Costa Rican colones which is around $17 USD. So always ask and make sure you know which currency you’re being charged in!

I used my debit card for a couple of years in Costa Rica before getting a credit card and it was fine. However, I don’t recommend it since there isn’t as much protection for debit cards as there is for credit cards. Car rental companies don’t normally take debit cards since the deposit takes 1-3 months to return compared to 72 hours for credit card.

Tips for traveling in Costa Rica on a budget

How to bargain in Costa Rica

How much things cost in Costa Rica