There are 4,000 known species of insects in Costa Rica so it’s impossible to vacation here without running into one of them at one point or another. It’s just part of the nature and wildlife of Costa Rica which is a tropical country. I know a lot of people are scared of bugs but remember, it was their jungle first and they actually aren’t all too bad.

A lot of people ask me what the bugs situation is like in Costa Rica and here’s some of the insects and critters you may see.

Also keep in mind that it is not normal to see these bugs everyday all the time. Hotels, especially luxury hotels fumigate often and deep clean. Unless you plan to stay really in the rainforests or you’re staying in a cheap budget hostel/hotel, your hotel room won’t be overrun with bugs. In fact, some people visit Costa Rica and hardly see any of the “scary bugs.” It really depends on where you are going and where you’re staying.

Remember, when you are out in the forests, do not touch any trees, flowers, plants, shrubs or leaves. Always follow your guide and stay on the trail!

Arachnids and Insects in Costa Rica

Costa Rica has a lot of spiders including the common daddy long legs that frequent households. Another common spider you may see out in the forests is the Golden Silk Orb Weavers which are actually very cool! They make really big webs and have a pretty coloration.  These spiders do get big in size and we have seen them catch a fully grown big grasshopper, it was fascinating to watch.

There are also tarantulas in Costa Rica. We have seen them on a night tour which was crazy. Our guide found them in their home, a hole in the dirt by the side of the trail and it was actually very chill. It did not mind us taking pictures of it or walking right in front of his house!

14 different species of scorpion live in Costa Rica and you need to watch out for these guys because if they sting you, it hurts. We have encountered quite a few of them in our house and I have been stung a few times. BUT don’t freak out – this is not normal. We live on a big forest property so it is more common for us.

If you see one, do not provoke it or get close as they will get aggressive. If you do get stung by a scorpion, they say to immediately wash the area with soap and water or if you have access, put some lime on it. If the area starts to swell, put a cold pack on it to keep the swelling down and to relieve the pain. The pain should subside within a hour or so. If it doesn’t and your symptoms start getting worse or you begin feeling other types of pain, you should see a doctor.

We occasionally see a dead rolled up one in our house or walking around outside especially during rainy season. I have seen them get really long, about the length of my hand! 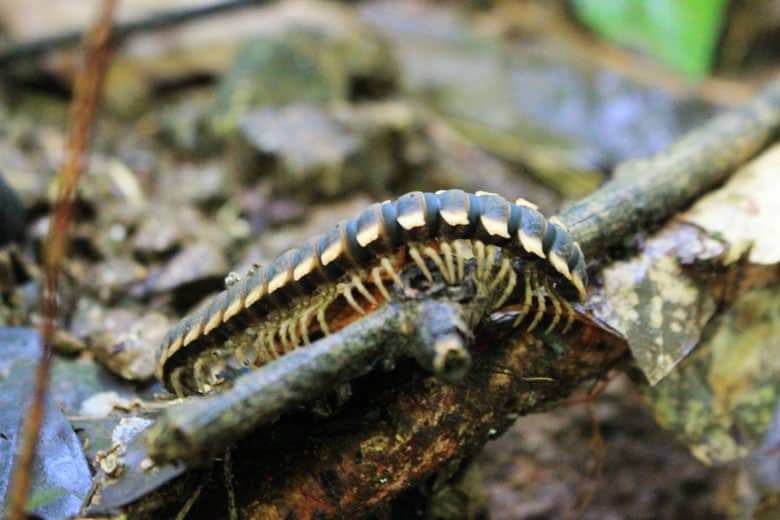 I know they will release a venom if they bite you so I would avoid these at all costs. It’s painful and it will swell but it’s not life threatening to humans. However, it can cause severe allergic reactions that you need to look out for if you do get bit. They don’t attack people though and are harmless when left alone. They are very common in the rainy season.

It is impossible not to see any ants in Costa Rica but there is one ant that is fascinating: the leafcutter ant. They are common in all the rainforests and you’ll know it’s them when you see tiny pieces of leaves moving in a line on the forest floor. The leafcutter ants take these pieces back to their nest to feed a certain type of fungi that the ant eats. So cool!

One ant that you need to avoid at all costs is the big black one called Bullet Ants. These are more common in the thick rainforest areas such as Braulio Carillo National Park, Sarapiqui, Bijagua, Corcovado and those areas. They have an extremely painful bites.

These ones are usually the insects people are the most grossed out by. Cockroaches are fairly common here and they get big.

Mid to high end hotels do a fairly good job of fumigating so cockroaches shouldn’t be something normal to see. However, if you are staying in really cheap, budget places, you may see one. I saw dead cockroaches in our room when we stayed at Arenal Backpackers Resort.

When you come to Costa Rica, you will get bit. Mosquitoes are present all year round since Costa Rica is a tropical climate. Rainy season is the worst time for mosquitoes because they reproduce in stagnant water. Not only are their bites really annoying, but you can get several diseases from an infected mosquito such as dengue and zika. The only places that doesn’t really have mosquitoes are high elevation areas like Monteverde.

Dengue is a problem in Costa Rica so for your trip, make sure you bring plenty of repellent. You can read up on our favorite products to protect from mosquitoes. We’ve experimented with lots of products and give our verdict on each one.

Now here’s an insect that people love! You can see beautiful butterflies throughout the country since Costa Rica has around 1,500 species of butterflies. The best places are around Monteverde, the Central Valley and the South since you can see the famous Blue Morphos. The most fascinating one in my opinion is the Glasswinged butterfly, it has see through wings!

You can visit butterfly farms to learn more about these insects and their life cycle at La Paz and Monteverde.

If you’re really into insects, you have to take a night tour. We did a Monteverde night walk and saw a variety of insects and arachnids!

Here are some other critters and insects in Costa Rica we’ve seen. I don’t know the names to all of them but they are pretty cool! 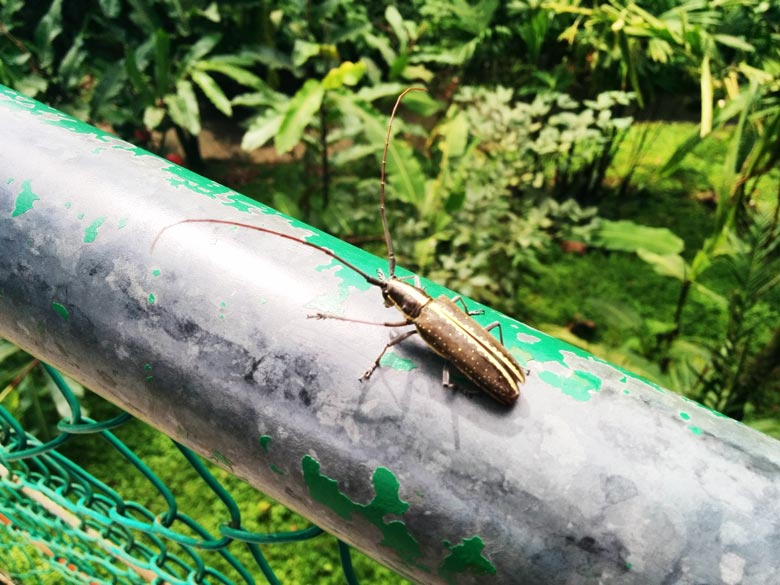 If you want to learn more about them, we highly recommend taking a guided walk in Costa Rica. Your naturalist guide will share interesting facts about the creatures which will make you appreciate and respect them more.